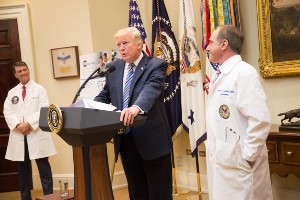 According to a recent New York Times article, chaos among the Department of Veterans’ Affairs’ leadership has rippled outwards, causing doctors and administrative staff throughout the VA system to question the integrity of the department. Many key staff members have opted to quit rather than wait out the uncertainty, leaving veterans desperately underserved.

When Former VA Secretary David Shulkin was confirmed on February 13th, 2017, spirits were high. He was tasked with cleaning up massive dysfunction at the VA, and there was universal confidence that he would do so successfully. He made many tremendous strides towards improving the VA system during his tenure.

Yet, even in the face of his success, he couldn’t weather the ongoing political battle over privatization, and Shulkin, as an opponent of privatization, was ultimately fired.

Shortly after firing Shulkin, President Trump nominated Ronny Jackson as the new VA Secretary. Veterans groups and politicians alike were immediately concerned, and, after a long list of embarrassing allegations was released by the office of Senator Jon Tester,  Jackson withdrew from consideration.

With so much instability at the highest levels of the VA, doctors and other staff nationwide have questioned whether they have a future at the department. Additionally, many jobs have become unbearably stressful as projects put in place by Shulkin, such as the much-needed overhaul of the VA’s outdated computer system, are put on hold.

Four of the five doctors at the Ukiah Veterans' Affairs Outpatient Clinic in Northern California have quit, leaving Ukiah veterans dependent on “remote doctors and video screens.” So have Scott Blackburn, the consultant who was supervising the records-system overhaul, Christopher Vojta, who played a major role in running VA health-care centers, and Dr. Amy Fahrenkpf, who was working with the department to improve the choice program. These are just a few among many across every level of the VA who have chosen to leave the department.

With so many key personnel leaving the agency, the very mess Shulkin had spent a year cleaning up is resurfacing.

No End in Sight

According to the New York Times, “administration officials are likely to take their time interviewing and vetting candidates for the top job this time around.”

We Provide Stability When It Matters Most

At the Law Offices of Attorney Sean Kendall, we are committed to making sure veterans receive the benefits they are entitled to no matter what. If you believe you may be eligible for disability benefits, we encourage you to apply right away. If you have already applied and you received a denial or an unacceptable rating decision, we are here to help. With decades of combined experience overturning VA denials, we are confident we can win you the benefits you deserve. When you are ready, send us a note or give us a call at (877) 629-1712.