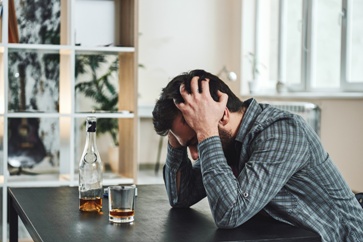 Alcoholism, like other substance use disorders, is a biologically based illness with complex environmental triggers. While there is evidence to suggest that some people have a genetic propensity to develop a problem with alcohol abuse, the condition is often triggered by stress and trauma.

Since not all people who drink heavily are struggling with addiction, alcoholism can be hard to diagnose. However, some common signs that indicate treatment may be needed include:

People with PTSD often use alcohol as a way to temporarily escape from the intrusive thoughts and feelings associated with their condition. However, alcohol abuse can actually increase PTSD symptoms over time. Drinking lowers the body's production of serotonin and norepinephrine. Serotonin affects your mood, appetite, sleep, and memory, while norepinephrine controls how the body reacts to stressful situations and events. Low levels of serotonin and norepinephrine will make everyday challenges seem worse than they are—creating a cycle that reinforces mental health struggles.

People with PTSD who have been diagnosed with alcoholism report increased:

Alcohol abuse can also weaken a Veteran's sources of social support by making it difficult to maintain close relationships with family and friends. This increases feelings of isolation and disconnection that can worsen PTSD symptoms and make it harder to manage cravings for alcohol.

Once detox has been completed and a sober baseline has been established, a Veteran must learn to cope with PTSD symptoms without drinking. This typically involves a number of lifestyle modifications, as well as the use of cognitive behavioral therapy (CBT) techniques and antidepressant medications.

The VA offers a number of treatment options to address both alcoholism and PTSD, including short-term outpatient counseling, intensive outpatient treatment, and residential (live-in) care. All VA Medical Centers provide PTSD treatment, and some locations have specialized PTSD programs.

Statements from family and friends who knew you before and after your military service play a vital role in this type of disability claim. Showing that you either did not drink or only drank a minimal amount of alcohol before your service supports the claim that your addiction is related to your PTSD stressor.

The office of Sean Kendall, Attorney-at-Law, has helped a number of Veterans with PTSD receive compensation for conditions that are caused by their alcoholism. For example, we helped Navy Veteran Clarence get Total Disability Individual Unemployability (TDIU) benefits approved after he was unable to continue working as a pastor due to his service-connected psychiatric disorder, PTSD, major depression, and alcohol abuse.

If you're having trouble accessing your VA disability benefits, our Veteran's benefits attorneys can help. Call today to schedule a free, no-obligation initial consultation.