Agent Orange was used from 1962 to 1975 to defoliate the jungle for military operations related to the Vietnam War. This herbicide contained dioxin and dioxin-like compounds that have since been linked to several serious medical conditions.

Veterans who served in Vietnam, the Korean Demilitarized Zone, or on Thai Air Force bases; who flew on or worked on C-123 Aircraft, or who were stationed at locations where herbicides were tested or stored are encouraged to complete a free Agent Orange registry health exam to learn more about the 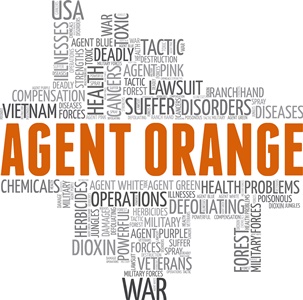 potential consequences of their exposure. If a Veteran has been diagnosed with an illness related to Agent Orange, they are eligible for VA disability benefits.

Agent Orange has been linked to several different types of cancer. The following are eligible for a presumptive service connection:

Type 2 diabetes occurs when the body either resists the effects of insulin or does not produce enough insulin to maintain normal blood glucose levels. The general public often associates the condition with being overweight and having a sedentary lifestyle, but it can also be triggered by exposure to Agent Orange. If left untreated, diabetes can lead to serious health problems such as heart disease, kidney disease, vision problems, hearing impairment, and nerve damage.

Hypothyroidism is characterized by a decreased production of thyroid hormones. This leads to symptoms such as fatigue, weight gain, constipation, dry skin, thinning hair, memory impairment, and depression. If left untreated, it can cause breathing troubles, heart problems, and serious mental health issues. A life-threatening condition called myxedema coma can also be a potential complication.

Ischemic heart disease, also known as coronary artery disease and coronary heart disease, is caused by narrowed heart arteries. When arteries are narrowed, less blood and oxygen reach the heart muscle. This can lead to chest pains, shortness of breath, and the possibility of a heart attack. In most people, the condition develops slowly over a number of years. The initial symptoms are subtle, but obtaining an early diagnosis improves patient outcomes.

Also known as primary amyloidosis, AL amyloidosis is the most common form of systemic amyloidosis in the United States. It occurs when a person's antibody-producing cells produce abnormal protein fibers making light chains that form amyloid deposits leading to different types of organ damage. The kidneys are the most often affected, but this condition can also damage the heart, peripheral nervous system, gastrointestinal tract, blood, lungs, and skin.

Peripheral neuropathy is damage to the peripheral nerves on the outside of the brain and spinal cord. It is characterized by weakness, numbness, and pain—most often in the hands and feet. This condition is presumed to be caused by Agent Orange if it is at least 10% disabling within one year of the herbicide exposure.

Porphyria cutanea tarda is a condition affecting liver function and resulting in painful blisters when the skin is exposed to the sun. It results from low levels of heme, a component that is necessary for hemoglobin to carry oxygen in the blood. Porphyria cutanea tarda is presumed to be caused by Agent Orange if it is at least 10% disabling within one year of exposure.

Chloracne is a skin condition associated with chemical exposure that causes blackheads, cysts, and pustules similar to hormonal acne in teenagers. Chloracne (or related types of acneiform disease) is eligible for VA disability benefits with a presumptive service connection if it is at least 10% disabling within one year of herbicide exposure.

Do You Need to Speak With a VA Disability Benefits Attorney?

If you have been diagnosed with a disability that is related to Agent Orange exposure, our experienced Veterans benefits attorneys can help ensure that you receive the highest possible rating for your condition. Contact us today to schedule a free, no-obligation initial consultation.