A Look at the Connection Between PTSD and Sleep Apnea 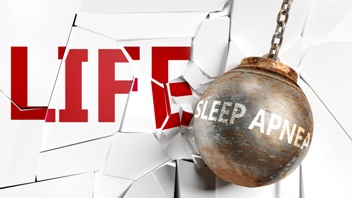 Post-traumatic stress disorder (PTSD) is well-known to cause nightmares, insomnia, and general sleep disruption. However, many Veterans fail to realize that there is an established link between PTSD and sleep apnea. In fact, one study published in the Journal of Clinical Sleep Medicine of Veterans from Iraq and Afghanistan with PTSD found 69.2% were at a high risk of developing sleep apnea.

Sleep apnea is a disorder characterized by interrupted breathing during sleep. It is most often diagnosed in older men, but it’s important to note that many women and younger people do suffer from the condition.

There are three main types of sleep apnea.

Sleep apnea is a serious medical condition. It greatly impacts a person’s quality of life since they will wake up feeling exhausted even if they’ve had a full night’s sleep. This can lead to difficulties at work or school, problems maintaining relationships with others, and an increased risk of car crashes or other forms of accidental injury.

Sleep apnea needs to be diagnosed with a sleep study performed by a qualified healthcare provider. The test, also known as a polysomnogram, is typically done at a sleep center but can be conducted at home for some individuals.

Some common signs that suggest a person may suffer from sleep apnea include:

Sleep apnea can be treated in a variety of ways. A Continuous Positive Airway Pressure (CPAP) machine is often recommended to deliver a constant flow of air into the nose to keep the airways open during sleep. Surgery helps in some cases, and lifestyle modifications such as losing weight or quitting smoking may also be recommended.

How Sleep Apnea Is Linked to PTSD

Although researchers have shown that people with PTSD are at a higher risk of developing sleep apnea, the nature of the link between the conditions isn’t fully understood. One common theory is that PTSD increases a person’s risk of developing other sleep apnea risk factors. These include:

Note that even though PTSD increases the risk of developing sleep apnea, treating sleep apnea has been shown to decrease the severity of a person’s PTSD symptoms. When the body is able to get the rest it needs, fewer stress hormones are released and the ability to cope with anxiety improves. A study published by the American College of Chest Physicians in the Chest Journal investigated the effect of CPAP adherence on PTSD and found that PTSD patients who were fully compliant with CPAP treatment experienced a significant reduction in nightmares associated with PTSD.

Getting Disability Benefits for Sleep Apnea and PTSD

In some cases, Veterans with PTSD and multiple secondary-service connected disabilities may qualify for Total Disability Individual Unemployability (TDIU). This allows them to receive disability benefits at the rate of a Veteran who is 100% disabled, even if they wouldn’t otherwise qualify for a 100% disability rating.
The office of Sean Kendall, Attorney-at-Law, helps Veterans navigate the complexities of VA disability law and maximize their compensation by adequately documenting their secondary-service connected disabilities. Contact our office today to schedule a free, no-obligation initial consultation.