The History of PTSD Among U.S. Veterans

Over time, our understanding of post-traumatic stress disorder (PTSD) continues to evolve. If you're a Veteran struggling with PTSD, knowing the history of this mental health condition may help you feel less alone as you work through the process of applying for VA disability benefits.

How Soldiers Throughout History Viewed Their Mental Health Struggles

In 1761, Austrian physician Josef Leopold described feelings of "nostalgia" among soldiers where they reported having trouble sleeping, suffering from anxiety, and feeling sad due to their military experience. This simplistic view of PTSD-like symptoms was the model of psychological injury that existed into the Civil War.

During the American Civil War (1861 to 1865), doctor Jacob Mendez Da Costa studied soldiers with cardiac symptoms such as trouble breathing and a rapid pulse accompanied by severe anxiety. This was referred to as "soldier's heart" or "irritable heart" and "Da Costa's Syndrome." Affected soldiers were given drugs to address their symptoms, then sent back into battle. American author Stephen Crane's novel The Red Badge of Courage, published in 1895, describes a PTSD-like 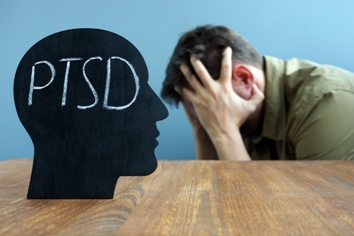 reaction of a new Union Army recruit who is faced with Confederate artillery.

World War I (1914 to 1918) led the medical community to describe PTSD symptoms as "shell shock." The psychological effects soldiers experienced were thought to be a reaction to the explosion of artillery shells and caused by hidden damage to the brain. When soldiers who hadn't been near explosions started suffering from the same symptoms, doctors began describing the condition as "war neuroses." Treatment for the condition varied, but most soldiers were given just a few days of rest before being told to return to the field. Even in chronic cases, the focus was on getting them to return to normal lives as quickly as possible.

By World War II (1939 to 1945), what we now refer to as PTSD was called "combat stress reaction" (CSR) or "battle fatigue." There were still notable skeptics, including Lieutenant Gen. George S. Patton, who did not believe the problem was real. Affected Veterans struggled to access the care they needed even though up to half of all military discharges during this period were due to CSR. Many were unfairly accused of being cowardly and lacking the moral courage necessary to serve their country.

If you'd like to learn more about how the military's views of PTSD have evolved over time, journalist David Morris provides an intriguing look at this topic in The Evil Hours: A Biography of Post-Traumatic Stress Disorder. Published in 2016, this book looks at the history of PTSD in the military while sharing personal anecdotes from his own experience in war-torn Iraq.

The first Diagnostic and Statistical Manual of Mental Disorders (DSM-I) was published by the American Psychiatric Association (APA) in 1952. This guidebook attempted to provide diagnostic assistance for providers treating the mentally ill and included a listing for "gross stress reaction" that described a reaction to trauma lasting less than six months.

In 1968, DSM-II removed the "gross stress reaction listing" and added "adjustment reaction to adult life." This diagnosis of a PTSD-like condition was limited to three groups: soldiers with fear resulting from combat, women experiencing unwanted pregnancy with suicidal thoughts, and prisoners facing a death sentence.

In 1980, PTSD was added to DSM-III based on the findings from research involving several groups of people who had suffered severe forms of psychological trauma—including Vietnam War Veterans. Revisions to the diagnostic criteria in DSM-III-R (1987), DSM-IV (1994), DSM-IV-TR (2000), and DSM-5 (2013) continued to reflect an evolving understanding of how the condition affects a person's daily life and their ability to function on a long-term basis.

The VA's National Center for PTSD was created in 1989 to provide care for affected Veterans. Today, the Center trains providers in using Cognitive Processing Therapy (CPT) or Prolonged Exposure (PE) to help affected Veterans cope with the symptoms of their condition.

In addition to receiving medical treatment from the VA, Veterans with PTSD connected to their military service are entitled to disability benefits providing monthly cash compensation. Veterans are assigned ratings from 0% to 100% based on the severity of their condition, with higher ratings leading to additional monthly compensation. When a Veteran's PTSD prevents them from maintaining substantially gainful employment, Total Disability Individual Unemployability (TDIU) benefits may be available.

The office of Sean Kendall, Attorney-at-Law, works with Veterans suffering from PTSD who are having trouble accessing their VA benefits. Contact us today to schedule a free, no-obligation initial consultation with a dedicated Veterans benefits attorney.