What That Confusing Letter From VA Really Means 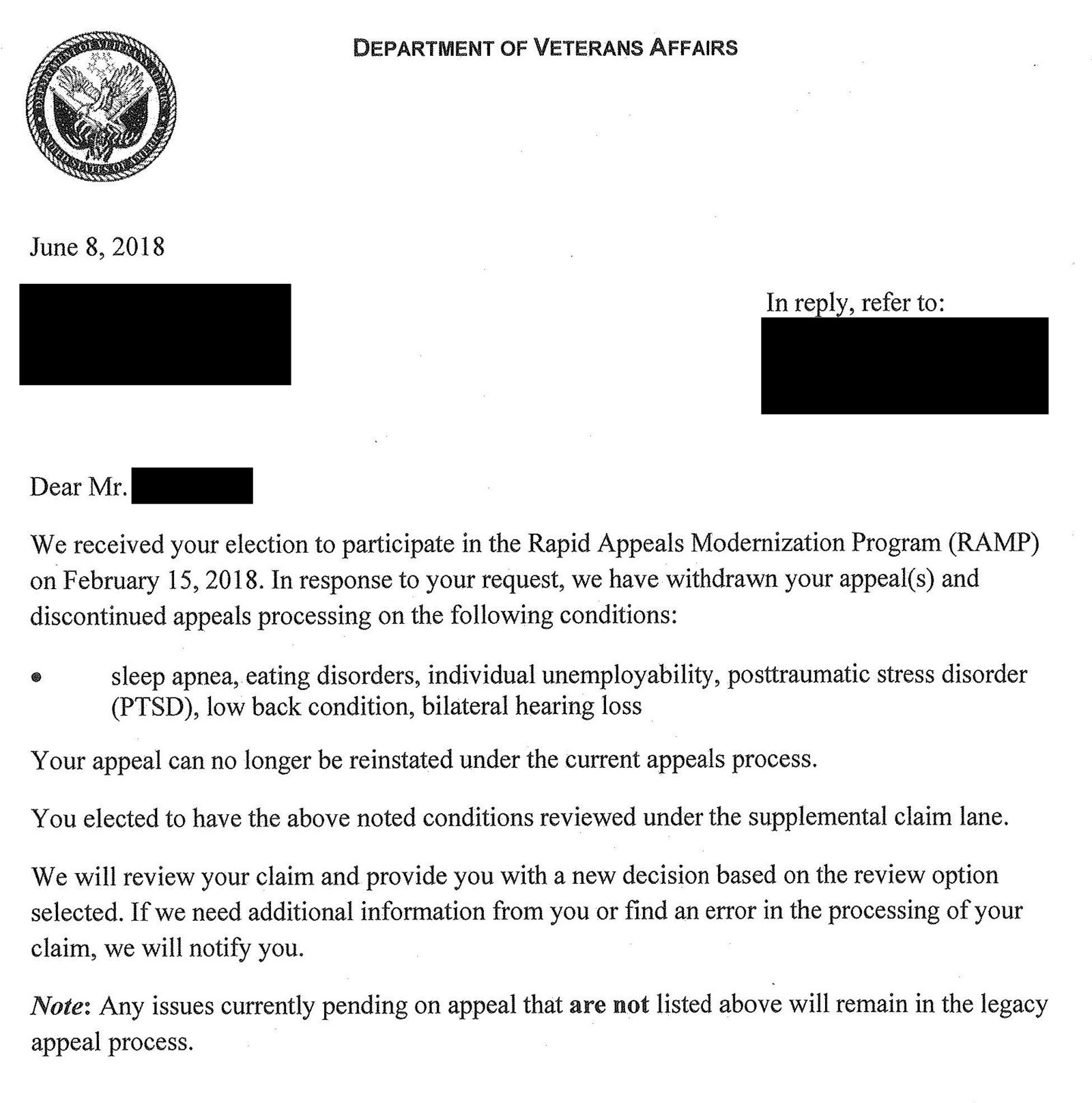 Have you received a letter from the VA stating that your appeals have been withdrawn and discontinued? Recently our office has received numerous phone calls from veterans who have opted into RAMP (Rapid Appeals Modernization Program) and are confused ny a letter from the Department of Veterans' Affairs stating that their appeals have been withdrawn and discontinued. We've included a redacted example (above) of the letter in question, and you can certainly see why any veteran receiving this letter would be anxious and even angry.

Opting into RAMP  means that your case is removed from the regular appeals stream and transferred into an expedited process in which a decision is made based on the evidence of record and an informal phone conference between the attorney and a Decision Review Officer. This of course speeds up the appeals process, and veterans participating in RAMP are expected to receive a decision within approximately 60 days rather than waiting a year or two for a formal hearing.

Despite what the very confusing letter shown above says, opting into RAMP does not mean that your appeal is "withdrawn" or "discontinued." It is completely understandable why so many veterans receiving this letter after opting into RAMP have called our office asking if their VA cases have been closed. We cannot explain VA's logic around this poorly worded letter, but in the fourth paragraph they do state "You elected to have the above noted conditions reviewed under the supplemental claim line," and that is the gist of the letter - and the sentence they should start the letter with, rather than confusing and even scaring veterans with a paragraph about claims being "withdrawn" and "discontinued."

As the bottom of the letter states, after opting into RAMP the Department of Veterans' Affairs "will review your claim and provide you with a new decision" or notify you of any additional information needed. Any issues you have not selected to be moved into RAMP processing will remain in the normal appeals stream. Most importantly, when you move claims into RAMP they are absolutely not "discontinued" or "withdrawn"; they are simply moved into a different, faster claim lane streamlined for the benefit of veterans who already have the necessary argument and evidence submitted and want a decision right away instead of waiting for a formal hearing, an expert report or records that take a while to obtain.

Opting into RAMP is not a good choice for all veterans with disability claims appeals at VA, but rest assured that if you and your representative decide to opt your case into RAMP you do not need to worry after receiving this letter from VA that your appeals have been "withdrawn" or "discontinued." In fact, a decision should be coming soon if you opted into RAMP. If you have questions about RAMP or any other VA-disability issue, please do not hesitate to call the offices of Attorney Sean Kendall at 877-629-1712 today.