Service Connection for Diseases Caused By Smoking and PTSD 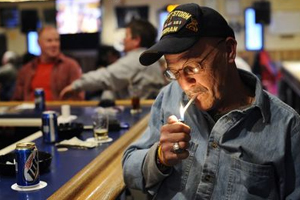 The issue of cigarette smoke causing cancer may seem deep with irony considering the U.S. military used to include cigarettes in soldiers’ rations, but the issue is interesting and complex. When Attorney Sean Kendall and myself met with the family of a deceased World War II and Korean War veteran a few years ago in Santa Fe, New Mexico, I wasn’t familiar with the issue of smoking-related diseases secondary to service-connected Post-Traumatic Stress Order. However, a doctor’s letter explaining how the veteran’s post-service addiction to nicotine was a “coping mechanism” related to PTSD caught my attention.

In the report, the doctor cited two studies linking heavy smoking to PTSD and noted that the veteran was at times suicidal and experienced “fury and fear,” as well as sleep disturbance and “fearful nightmares” associated with PTSD and other disabilities stemming from his time in military service. In 2009, 55 years after separation from service, the Department of Veterans’ Affairs labeled the veteran mentally incompetent. Noting “significant memory deficits and fluctuating attention and concentration” along with impaired reasoning. By that time, the veteran could not drive or manage his financial affairs, both of which were handled by his wife. Family members saw the veteran as a quiet, withdrawn, severely depressed man who often relied on smoking to ease his nervousness and also distract him from necessary medical attention he routinely avoided.

“The stress connected to experiences [that contributed to nicotine addiction] weakened his immune defenses and played a role in the course of his lymphoma and ultimately his death,” the doctor wrote. “A more proactive patient not adverse to medical attention might have sought a second opinion or immediate follow-up” and been able to better fight disease and live longer.

The veteran passed away in 2010, two years before our office met with members of his family and began representing his widow. In less than a year, Attorney Kendall was able to successfully argue – by submitting evidence and attending a VA hearing – that the veteran’s cause of death was service connected. You can review the Board's decision here.  The veteran was service connected for Post-Traumatic Stress Disorder (rated 70% disabling) at the time of his death; in its favorable decision less than a year after our office began representing the veteran, the Board of Veterans’ Appeals ruled that “service-connected PTSD contributed substantially and materially to the veteran’s death,” as smoking contributed to both the veteran’s lymphoma and his “overall health in fighting his lymphoma,” and smoking was caused by a service-connected disability.

Along with the medical opinion cited above, Attorney Kendall’s handling of the Board hearing was instrumental in proving to the Department of Veterans’ Affairs that the veteran’s cause of death was service connected. Our office was also able to expedite the Board’s completion of a decision in this case by requesting that the Department of Veterans’ Affairs expedite the widow’s claim for benefits because she was over 75 years old during the claims process.

If you are a veteran or surviving dependent who believes that heavy smoking caused by a service-connected disability such as PTSD led to a disease and/or an inability to fight a disease, make sure to call the office of Attorney Sean Kendall today at 877-629-1712, as it is imperative to have an experienced veterans’ attorney not only take on your case but also make sure it is treated as expeditiously as possible by the Department of Veterans’ Affairs.

by Adam M. Perry
2 Comments
Great article, I wouldn't think that smoking would be a coping mechanism. I think that we owe veterans a satisfactory, predictable, and ACCESSIBLE standard of care within the Veterans Health Administration (commonly referred to as the VA), especially in the area of mental health, substance abuse and other issues that they face. I've been doing research on veterans in regards to addiction, mental health and suicide when I came across a really good article. Should anyone else be interested to see how this would help others here’s the page I looked at https://oceanbreezerecovery.org/blog/veteran-addiction-part-1/ Hopefully, this information helps another soldier/veteran.
by tameka October 27, 2017 at 11:51 AM
OK what you say sound good, But you need to look at breathing problem, like COPD. You are right, smoke was put in the ration food packs, Not only in WW II and korean War and VIETNAM, I did not smoke until my first tour of duty in Nam ( 68-69 ) and more so the second tour of Nam (70-71) when I got back to the state and out of the army in 75 I was 3 to 4 packs a day...... Yes I do have a PTSD rating...... about 5 months ago I was put on Oxygen 24/7/365
by David Anderson March 18, 2017 at 03:28 PM
Post a Comment